Thank you for your interest in our company.

Unfortunately, we are not hiring writers now due to low season.

We will be glad to review your application in the future.

Australia is a country that is known for its excellent education. It’s one of the main reasons that turn it into such a popular choice among students who come to study there from all over the world. They hope to get their degrees before receiving access to unique career opportunities that may remain closed to those who graduated from educational centres in other countries. How is this prestige displayed? Among the best universities in Australia, there are seven of those that constantly make it into top 100 unis in the world. That’s a huge number, and it proves that education gained in this country is recognised in the world arena, making it highly coveted.

Currently, there are 43 Australian higher educational establishments. Among them, two are international and one is private, with each accepting a significant number of applicants yearly. An interesting and further revealing fact is that this country has the third biggest quantity of international students across the world. It’s a top choice for a reason, but what exactly makes Australian education so special? What unis can be considered the very best there?

Top 10 Universities in Australia: Basic Facts You Need to Know

Each university is unique in its approach to education. The overall quality, along with individual preferences, make some places more popular than others, though. Take a look at the following list, then choose a university that speaks most to you. Based on QS University Rankings, we’ve made a special selection for you to check and pick. Each of them has an excellent reputation, meaning that with its help, you’ll be given the education you have always dreamed about.

Beating the number two just this year, Australian National Uni has it’s solid place in the top 50 scroll worldwide. Founded in 1953, it’s famous for its research achievements, with such direction as Social Sciences being the most prestigious one. It’s also featured in the renowned Group of Eight. Library, observatory, school of art — you’ll find what ignites your passion here for sure. With 44% international, it offers a rather individual approach to studying. Its main campus is located right in the middle of Canberra, but there are other campuses in Kioloa, Mount Stromlo, and North Australia, which increases this uni’s reach. Each possesses excellent facilities that make students’ life educational, healthy, & exciting.

2) The University of Sydney

This unique institution was the first one on Australian territory, so it has a rich history displayed both in its campuses and in its curriculum. It cooperates with more than 90 known research centres and 58% of their students are foreigners from over 130 countries. The University of Sydney has a huge focus on international programs with more than 30 countries. Located in Sydney, it is surrounded by popular sights that will leave visitors breathless, making their studies even more pleasant. A combination of old and modern architecture entwined within campuses’ design creates a feeling of wonder. So apart from getting superior knowledge, you’ll also be treated to a truly beautiful visual picture, knowing you are a part of history.

3) The University of Melbourne

This legendary uni has been one of Australian leaders for many years. It was founded back in 1853 and released a countless number of professionals who became highly sought after by employers all over the world since then. Located in the heart of Victoria, it hosts a record number of 49% non-Australian students. While the institution offers numerous specialties, Healthcare and Nursing is the most popular major here. It’s appreciated by Aussie & world professionals alike. With a close location to known hospitals and biotechnologies companies, it ensures excellent practice for its students. Melbourne uni has seven large historical campuses, with three of them in the metropolitan area. If you enrol here, you definitely won’t be disappointed.

4) The University of New South Wales

Established in New South Wales in 1949, this institution is a founding Group of Eight members with 19,000 foreign students who have found a place there. It’s a beloved choice made by many as it offers great research opportunities and a rich, long list of graduates who made a loud name for themselves. It hosts one of the biggest cancer research centres, so New South Wales is a wonderful option for those interested in a sphere like this. The workload is tense there, though, so be prepared!

5) The University of Queensland

Among Australian university rankings, this one takes a deserved respectable place because it has gained stunning results in the public research sphere. It was created in 1909. Currently, it has 52% of foreign pupils studying within its halls. Its Life Sciences major is regarded as an epitome of excellency, so if this is what you like, you might want to learn more about this particular place. As evident from the name, this institution is located in Queensland, a very well-known area that lots of people hope to visit. It has a place in the world’s top 100 institutions, which only solidifies its reputation.

Victoria is breathtaking, and since that’s where Monash is located, by becoming its part, you’ll get a chance to gain a memorable experience that many tourists only hope for. An interesting fact is that this is the biggest knowledge centre in the entire country, as well as a respected member of Group of Eight. Being a rather new place built in 1958, its growth is impressive, showing how much success Monash has managed to obtain during the last decades. 57% of the student are non-Australians, so if you’re a resident from another country, don’t worry: you’ll find like-minded individuals.

7) The University of Western Australia

Being among top universities in Australia, it was built in 1911, becoming the first institution in the Western Australia region. Group of Eight features it as its respected part, which proves its leadership among Aussies even further. It’s divided into 9 major segments from which you can choose. Namely, it presents such specialties as Computing and Mathematics, Architecture, Indigenous Studies and Science, Engineering, Law, Dentistry and Health Sciences, Business, Education, and finally, Landscape and Visual Arts. The main campus is in Perth, which is a beautiful capital of Western Australia. It offers so many facilities that students do not need to go far since they are provided with entertainment, health, and food services right there. Cinemas, hairdressers, banks, and cafes — you can find anything you want. 48% of students here come from other countries and in most cases, none among them regrets their choice.

8) The University of Adelaide

This public uni was established in Adelaide in 1874. It has five large faculties with corresponding schools covering various knowledge fields, so whatever your specialty is, you’re almost guaranteed to find it here. Having a membership pertaining to Group of Eight, it has also educated five phenomenal scholars that became Nobel laureates after finishing their studies. International pupils compose 27% of its population. Modern campuses will charm you quickly and irrevocably, so think whether this is a place for you.

9) The University of Technology (Sydney)

With its origins going back to 1833, this public uni is a part of the Australian Technology Network. In the form that we know it, though, it was established around 1988 only. It makes it a young and promising institution that has gained recognition on an international scale at this point. Its campus comprises five rather big precincts, with main specialties ranging between Arts and Social Sciences, Science, Architecture and Building, Engineering and IT, Health, and Design. With 8,489 international students, it’s a welcoming location for uprising researchers.

10) The University of Wollongong

Recently in top 10, this university offers a great variety of degree programs in over than 300 directions. The most popular of them include Business, Engineering and Information Sciences, Law, Humanities, Arts, Medicine and health, and Social Sciences. The university has over 5000 international students and focuses on engaging more every year. If you’re looking for a place of a great diversity and foreigner-welcoming environment, University of Wollongong may be your choice.

Checking out 5 top universities in Australia is great but remember that this country has many more study places to offer. See other educational centres that will welcome you as their newest member. Consider making your choice based on such crucial criteria as the overall ranking and students: staff ratio. You can also see how many international students entered which uni. It might help you evaluate your chances and see the communities you’d rather join. Pay attention to the region as well since this element is important, especially if you already live in this country and want to pick something closer to home.

Our writers have already helped 2,000+ students conquer their homework goals. Let them help you. 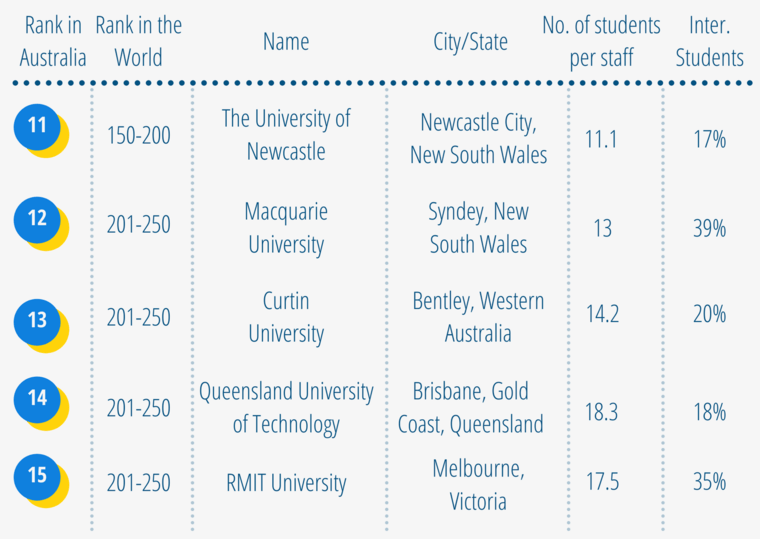 After looking through list of Australian universities, you can make a thoughtful choice about where you’d prefer to study. Don’t take this decision lightly and make sure you learn everything about the option that interested you most. Only this way, you will be able to truly enjoy your studies!

Just follow the formula:
Our outline + your text =
perfect essay Arguments & references included! Get in 12 h

Our writers have already helped 2,000+ students conquer their homework goals. Let them help you.

Meet all your essay deadlines with the help of our expert writers.

Get me a writer
Don’t waste your time writing essays!


The writing remedy for people who just don’t have the time.